As the wind pushes the tall Poplar tree around in the back garden and the first greeny yellow leaves lay strewn across the lawn I am left in no doubt that the seasons are well and truly on the change. For us as scarf wholesalers Autumn is our prime time as our customers ready themselves for the coolness, and the warmth of the festive season. Soon the clocks will go back and the nights eat ever more greedily into the days until we are left with a 6 or 7 hour window of light to function by. Red noses and misty breath will take the place of sun tans and sweat as the balmy warmth of a wonderful summer slips into history to become a distant memory. 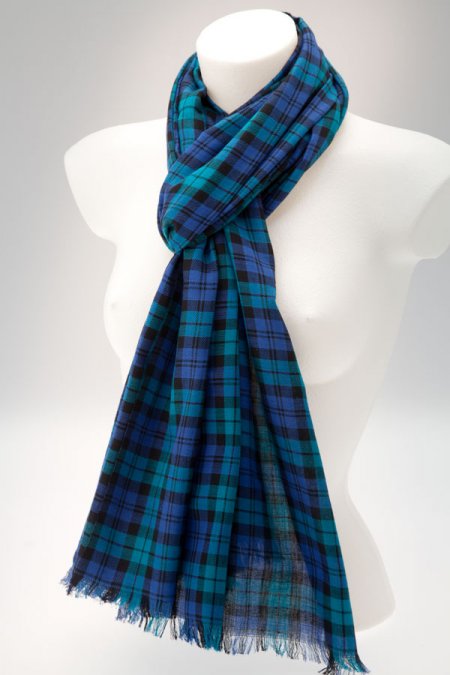 In simple terms a tartan pattern is a criss cross pattern of vertical and horizontal bands in various colours. The English word, Tartan is derived from a French word, "Tiretain", which is probably derived from the word tirer which refers to woven rather than knitted fabric. Today Tartan is multi coloured patterns but originally it did'nt need to be made of any pattern. As late as 1830 it could be described as without any pattern, totally plain in design. From the gaelic speaking Scottish Highlands traditional patterned cloth was historically called "Breacan", which in old Gaelic means "many colours". As time passed the meanings of the words "Tiretain" and "Breacan" became fused to describe a particular type of multi coloured pattern. 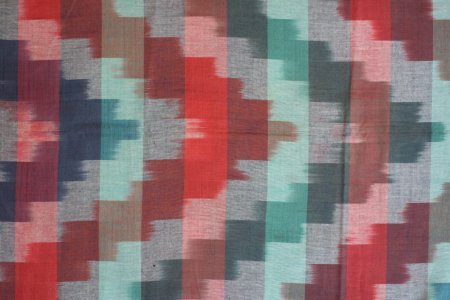 Ikat is a process used to produce patterned woven fabrics. Our recently introduced YS856 is made using this traditional technique.  The basis of the Ikat style is how the yarn is dyed and arranged on the warping drum in preparation for weaving. In our YS856 pictures below you can see how the warp yarns have been dyed in sections using navy, red and green dye. Each bundle of dyed yarns makes about a one inch width of woven fabric. The bands running across the width, or weft are dyed the same colours but not in the Ikat style. This is known as warp Ikat weaving. You can also get weft Ikat but this requires more time and attention as each weft thread needs placing precisely by the weaver. There are also double Ikat designs employing both warp and weft in the pattern.

Where are we going?

As many of you will know York Scarves came about not through planning but through evolution. From a backpack full of scarves and shawls we grew our business organically at the local market. You can read about how we started here in more detail. Since the inception of our wholesale scarf business we have tried many avenues to try and promote ourselves, not all fruitful, but we are moving forward. I am sure some of you will go to the many trade fairs around the country, and in fact a few years ago we were exhibiting at 5 or 6 shows each year. However the hit and miss nature of these events, along with the astronomical expense, forced us to look for a better return on our investment.

If you go back a couple of decades hardly anyone in the west had heard of “Pashmina”. These days it has become a generic term for any large scarf, stole or shawl. In reality Pashmina is very fine wool which comes from the underside of the belly and neck of the Capra Hircus goat which is native to high altitudes in the Himalayan range, generally living above 4500 mts. Because the climate is so cold these animals have developed incredibly fine woollen undercoats to help keep them warm. It is usually about 12 – 14 microns thick and almost unbelievably soft to the touch. They are not sheared as a sheep would be but the yarn is either collected naturally as it malts of or is collected by gentle brushing. Each animal can yield 3 – 6 ounces of yarn twice a year. The yarn of fine pashmina is traditionally spun by hand and is used in an un-dyed form with its natural colour being cream through to a grey/brown. Traditionally in Himalayan communities men would were very long stoles and shawls made from the coarser “guard hairs” of the goat. These being the outer hairs that protect the soft fine hairs underneath.

Sign up to our newsletter for the latest offers, products and more...